WISCO Industries Inc. is a producer of high-quality metal stampings, fabrications and food service equipment for major OEMs. When a global manufacturer of appliances recently contacted the company to bid on producing a new spring-latch for refrigeration unit doors – WISCO was excited about the opportunity.

Now, it was time for the WISCO team to roll up its sleeves and tackle the major challenge at hand. The OEM was seeking a cost-effective replacement for an existing refrigerator door latch that had proven unreliable and sometimes failed to properly support the door. The new latch assembly consisted of 21 separate components – a dizzying array of metal stampings, springs, plastic alignment blocks and rivets that would need to be pieced together like some type of intricate, high-tech puzzle. And, of course, simply assembling the latch wouldn’t be good enough. It was a process that would need to be repeated consistently, at a high rate of speed, with zero room for error. Only after cracking this code, could WISCO hope to differentiate itself from competitive bidders and secure the latch contract. 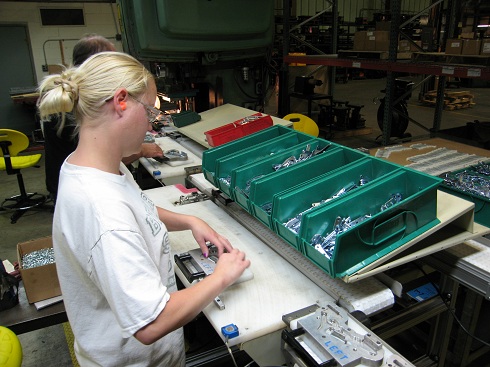 Fortunately, Crane Production Systems Corp., Waukesha, Wis., a distributor of Dorner conveyors and other industrial equipment, offered an ideal solution for WISCO. Crane recommended a Dorner conveyor that WISCO configured in a semi-automated process that would crank out the latches with unmatched accuracy and efficiency. The key to the process was a Dorner 2200 Series conveyor system that recirculated work-holding pallets and secondary operations to progressively assemble, rivet and test the latches. The pallets featured integral anvils as well as spring retainers that allowed difficult staking and assembly operations to be performed quickly and easily.

“The pallet-fixtured Dorner conveyor really offered us a variety of advantages for this particular application,” said Tom Michel, chief manufacturing engineer for WISCO Industries Inc. “Other processes simply would not allow the various components to be held together for proper assembly. Utilizing this system provided us with accurate alignment of the components, and – more importantly – ensure the correct assembly sequence. Assembling the parts out of sequence would actually be kind of difficult with this system because the parts simply wouldn’t fit correctly within the pallet fixture. And, by simplifying assembly, operator training also became much easier.”

This is all great, but did WISCO win the production contract? Of course, they did. By moving fast to develop a customized solution that combined the benefits of both man and machine – WISCO was able to produce the latches faster and at a lower cost than its competitors.